In February of 1912, thousands of Japanese cherry trees arrived in Washington, DC. The trees have been donated by Mayor Yukio Ozaki of Tokyo, in an effort to enhance the growing friendship between the United States and Japan. 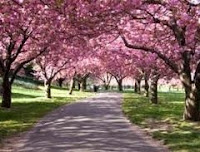 In a ceremony on March 27, 1912, First Lady Helen Herron Taft and Vis
countess Chinda, wife of the Japanese ambassador, planted the first two of these trees on the north bank of the Tidal Basin.

Every year thousands of people flock to DC to see the blossoming cherry trees and attend the events that herald the beginning of spring in the nation’s capital.

This year the festivals have a special meaning as a portion of the proceeds from the 2011 festival will be donated to the Red Cross, in an attempt to aid and assist the earthquake & tsunami victims in Japan.

Vamoose Bus is a proud supporter of the 2 week festival and is pleased to be a part of this great cause.

The chain of events commenced on March 26 and will continue through April 10, 2011.